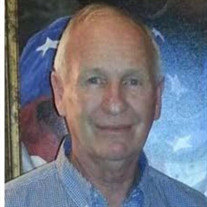 Benjamin Loren Fisher, 75, of Lake Toxaway, went to be with his Lord and Savior on July 5, 2020. He was born September 26, 1944 to the late John and Addie Owen Fisher. Along with his parents, he was preceded in death by two sisters, Katherine Mason (Doug), and Addalee Fisher. His precious in-laws, John and Frances C. Nicholson, and sister-in-laws Karen N. Wilde (Dennis) and Cindy Diane Nicholson also preceded him. Bennie was a 1963 graduate of Rosman High School. After graduation he started working at Olin Mathieson Corporation and shortly thereafter married the love of his life, Brenda Nicholson Fisher. In 1965, he was drafted into the United States Army where he proudly and heroically fought in the Vietnam War. During the 54 wonderful years of marriage Bennie and Brenda shared, they built a beautiful family. He leaves behind two daughters, Kellie Crabtree and husband Steve, and Tracie Owen and husband Jeff. While Bennie cherished his girls, his grandchildren and great grandson were the sunshine of his days. Grandchildren Zack Owen, Jacob Crabtree, Haley Owen, McKenzie Elliott and husband David, and Drey Owen, along with great grandson, Raleigh Simmons will greatly miss their Popaw. He is also survived by three brothers, Early J. “Bud” Fisher (Betty), Leon Fisher (Peggy), Kenneth Fisher (Helen), and one sister, Elaine McCall (Sidney). He always had a special bond with his sister-in-laws, Suzie N. Loftis (Sandy), and Dottie N. Thomas. He had countless nieces and nephews that thought there was no one like their Uncle Bennie. After the war, Bennie started working in the construction field building houses. He discovered his love for woodworking and in 1983 opened Ben’s Custom Woodworks where he built custom cabinets and furniture. His handiwork can be seen all over Transylvania County and beyond. He was truly a master wood craftsman. Upon retirement, Bennie and Brenda enjoyed traveling and making new lifelong friends wherever they adventured to. To know him was to love him. Bennie was a devoted Christian man that lived his life by example. He served in several leadership roles within Oak Grove Baptist Church in Lake Toxaway including being a Deacon. He was also a Master Mason with Dunn’s Rock Masonic Lodge #267. One of Bennie’s favorite phrases was, “always stay humble and kind.” He definitely lived out this motto everyday of his precious life.

Benjamin Loren Fisher, 75, of Lake Toxaway, went to be with his Lord and Savior on July 5, 2020. He was born September 26, 1944 to the late John and Addie Owen Fisher. Along with his parents, he was preceded in death by two sisters, Katherine... View Obituary & Service Information

The family of Benjamin Loren Fisher created this Life Tributes page to make it easy to share your memories.

Benjamin Loren Fisher, 75, of Lake Toxaway, went to be with his...

Send flowers to the Fisher family.