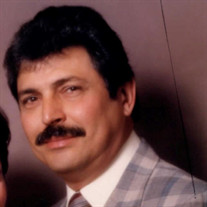 Edwin Weinstein of Seneca, South Carolina, 84, husband of Elizabeth (Mimi) Weinstein, passed away on Wednesday, August 11th in his home. He will be buried at the M.J. "Dolly" Cooper Veterans Cemetery in Anderson, SC. surrounded by his family. A "Celebration of Life" will be held in at Castaldo Park in Woodridge, IL on October 9, 2021 where a Bur Oak will be planted in his Living Memory. Edwin (also known as Ed and Zaddie to his many loved ones), was born in Chicago, IL and was the son of late Paul Weinstein and Sarah Cohen Weinstein. Ed grew up in Chicago, attended college at IIT and The School of the Art Institute of Chicago. Ed served in the Army and was stationed in Germany. He always had great stories to share of his time spent with the Army and was a proud veteran. Ed retired from Electronic Sound Corporation as a Design Engineer & Cabinet Maker of 35 years. Ed had a great passion for HAM Radio for many years. He was a member of DARC and BARC radio clubs. Ed was always very involved with running events, fundraising, teaching and mentoring up and coming radio operators. Ed was so eager and willing to help others with whatever was needed. He volunteered for many organizations that included The American Red Cross and C.E.R.T. (Civilian Emergency Response Team) to name a couple. He was very talented in many aspects of building and passed his knowledge on to his children and neighborhood kids. He also loved fishing, gardening, woodworking, jazz and classical music. Ed (Zaddie) was survived by his children; Michael (Margo) Sembach, Seanine (Bruce) Bowen, Patrick Sembach, Kathleen Layton-Harper, and Timothy (Lisa) Sembach, grandchildren; Erica (Chris) Busby, Jackson Bowen, Nicholas Layton, Steven (Lindsay) Meier, Sean (Kathy) Layton, Lauren (Shaun) Cotten, Kyle Hourigan, Amanda Harper and Dominic Pell; great grandchildren, Maddisyn Busby, Knox Meier, Ford Meier, and Lana Layton. Edwin was proceeded in death by his grandson, Jeremy Stella and granddaughter Micalah Sembach as well as his two brothers, Morton (Marcella) Weinstein and Donald (Jane) Weinstein. Messages and/or memories for Ed's family can be left on this website.

Edwin Weinstein of Seneca, South Carolina, 84, husband of Elizabeth (Mimi) Weinstein, passed away on Wednesday, August 11th in his home. He will be buried at the M.J. "Dolly" Cooper Veterans Cemetery in Anderson, SC. surrounded by his family. A... View Obituary & Service Information

The family of Mr. Edwin Weinstein created this Life Tributes page to make it easy to share your memories.

Send flowers to the Weinstein family.