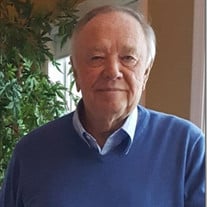 Floyd A. Jones, age 82, was born December 10th, 1938 in Sioux Falls, SD son of Floyd M. and Cora Genevive Jones . He attended Washington High School and graduated from South Dakota State with a degree in engineering. Floyd began his career working for Continental Can Corporation. He retired after 40 years as Director of Engineering. Floyd always generously shared his knowledge of can making with others and mentored many engineers in the field. Floyd was awarded several patents in the can production process for his work. Floyd was united in marriage to Susan Baird Jones in Glen Ellyn, Illinois in 1983. Floyd and Susan lived in Wheaton, Illinois until retiring to South Carolina in 2002. While balancing a successful career, Floyd had many hobbies and interests. He dedicated his life to his family and friends. As his children were growing up he was a little league baseball coach and Boy Scout Leader for many years. In retirement he and Susan shared many memories at the Lake Keowee house and traveled to many places. Floyd loved flying. His most memorable flight was flying his Bonanza to see his parents in SD. Besides his love of flight he enjoyed studying history, NASCAR, golfing, dinner club, wine club and boating on the lake. After a move to the upstate of SC and Keowee Key he became an avid follower of Clemson University sports. Floyd served on the Oconee County Habitat for Humanity Board 2004-2009 developing the Habitat Resale Store and serving as President. Floyd and his electrical group wired around 50 homes to provide a Habitat House for many in need. Grateful for having shared in his life is his wife, Susan; daughter, Sherry Hopson, Fallbrook, CA; Kevin Jones, Houston, TX; Craig Jones, Houston, TX and Robert (Yolanda) Jones, Morrison, CO; grandchildren Justin Jones, Joel Jones, Makenna Hopson, Reece Jones and Alie Jones; sister, Donna (Jerry) Michael, Sioux Falls, SD; brother Richard (Sherlyn) Jones, Austin, TX; many cousins, nieces and nephews, grandnieces and grandnephews. He is also survived by the Baird family, as well as many dear friends. He was preceded in death by his mother and father, Floyd M., and Cora Genevive Jones. A special thank you to all the medical staff at Mayo Clinic (Rochester, MN); AnMed Hospital; Prisma Hospital and Prisma Hospice House for all that cared for Floyd this last year. May the Lord bless you for the compassion and love that you provided him and the care, kindness and generosity that you give your patients each day. A Celebration of Life and Internment will take place at a later date in SC and Sioux Falls, SD. In lieu of flowers, the family would be grateful for donations in Floyd’s memory to: Oconee County Habitat for Humanity (OCHFH), P.O. Box 685, Seneca, SC 29679.

The family of Mr. Floyd A. Jones created this Life Tributes page to make it easy to share your memories.

Send flowers to the Jones family.