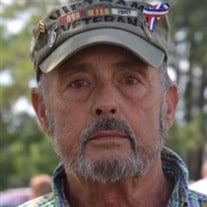 Henry Harrison Reese of Clayton, GA passed away on June 17, 2021 at the age of 74, in Seneca, SC surrounded by his family. His battle with serious medical issues throughout his life showed his courage in facing life challenges with a smile. Despite the pain, Henry came out a hero and stayed strong until the end. Henry was a Vietnam Veteran and very proud of his service to this country. He served in Vietnam in the United States Army as a Sergeant E-5, from May 12, 1967 to December 23, 1967. He was permanently retired in 1970 by reason of physical disability after spending several years at Walter Reed Army medical Center in Washington, D.C. from injuries due to the War. Henry was awarded the Air Medal, National Defense Medal, Vietnam Service Medal, Republic Vietnam Campaign Medal with Device 1960, Combat Infantryman Badge, Sharpshooter Rifle M-14, Marksman Rifle M-16 and a Purple Heart. Henry loved the outdoors and loved animals of all kinds. He was an avid hunter, beagle lover, and fisherman. He also loved auctions, flea markets and was avid collector of everything. He enjoyed racing, he was a Jimmy Johnson fanatic, and he was a firm believer that there was two sides to every story “the truth and his side.” But by far out of all of his hobbies, he loved his family with everything he was. Family meant the most to him his whole life. Family time included camping, boat rides on the pontoon, motorcycle rides, dirt track racing, horseback riding, tractor rides on his farm and the list could go on. Henry was preceded in death by his father William “Bob Hoss” Reese, his mother Nona Poindexter Reese, 2 older brothers, Thomas “Greasy” Reese and George “Spud” Reese, his ex-wife and mother to his first two children Louise Prince Cadanas and a grandson Samuel Cole Reese. Henry is survived by the love of his life and mother to his third child Sandy Craig of Walhalla, SC, 3 children Selena M. Kempton of Mountain Rest, SC, Aaron Reese and wife Justyne of Clayton, GA, Matthew Reese of Walhalla, SC, 3 step-children; Travis Watkins and wife Joanie of Walhalla, SC, Shaun Watkins and wife Amanda of Walhalla, SC, Ethan Watkins and wife Shelbi of Walhalla, SC, 5 grandchildren Jason McMahan of Franklin, NC, Michael McMahan and significant other Julia Hixon of Franklin, NC, Amber Reese of Wilmington, NC, Trevor Reese of Clayton, GA, Jayden Kempton of Franklin, NC, 8 step-grandchildren; Trey Gerrells of Clayton, GA, Thomas Watkins and significant other Aubrey Hawkins of Walhalla, SC, Jacob Watkins and fiancé Deanna Sheppard of Walhalla, SC, Lilee Watkins of Walhalla, SC, Austin Watkins of Walhalla, SC, Isaac Watkins, of Walhalla, SC, Sawyer Watkins of Walhalla, SC, and Emmalynn Watkins of Walhalla, SC. 3 great-grandchildren; Bryce Kaiser of Michigan, Lily McMahan of Franklin, NC, Owen McMahan of Franklin, NC and two step-great grandchildren Madison Rogers of Franklin, NC, and Thomas Jay Watkins of Walhalla, SC, 2 brothers William “Bill” Reese and wife Gail of Highlands, NC, and Larry “Louch” Reese and significant other Karen Forrester of Virginia and lots of nieces and nephews. The family will hold a Celebration of Life on August 6th, 2021 at 11:00 am at Maranatha Baptist Church 240 Keowee School Road Seneca, SC with pastor Shaun Watkins officiating. Once the church service is complete the family wishes to extend an invitation to take Henry on his last ride up Hwy 28 into Highlands, NC to the Highlands Memorial Park where at 2:30 pm he will be given his final salute.

Henry Harrison Reese of Clayton, GA passed away on June 17, 2021 at the age of 74, in Seneca, SC surrounded by his family. His battle with serious medical issues throughout his life showed his courage in facing life challenges with a smile.... View Obituary & Service Information

The family of Mr. Henry Harrison Reese created this Life Tributes page to make it easy to share your memories.

Send flowers to the Reese family.