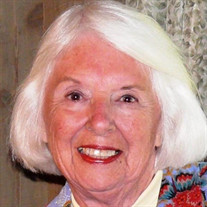 Jacqueline DeHaas Rigby, beloved wife, mother, grandmother, and friend, passed away from pneumonia caused by the Coronavirus on October 15, 2020 at the age of 88. Jacqueline was born on June 26, 1932 in Waukegan Illinois and raised in Marquette, Michigan. She attended Michigan State College (University), graduating in 1954 with a BS in speech education. While attending college, Jacqueline was actively involved in leadership activities, including participating as a member of the Student Union Board. She planned many campus events, and exceled at building community and unity among classmates. Jacqueline met her husband of nearly 66 years, John Millard Rigby, at a picnic in Marquette in the summer of 1954. After a whirlwind courtship, they were married on October 30th, 1954, surrounded by dozens of college friends and family. John and “Lynn,” as she came to be known, settled in Niles, Michigan, where John set up his law practice. Niles was home for 35 years, and where the young couple raised their four daughters, Anne, Jane, Sara, and Mary. Ever active in the community, Lynn was a member of the PTA, the Junior League, and the Trinity Episcopal Church. When her daughters were grown, Lynn went back to work at the Human Resource Commission for the Berrien County Drug and Alcoholism council, coordinating services for individuals and families whose lives had been challenged by addiction. She devoted endless hours to several countywide coalitions dedicated to substance abuse prevention, encouraging youth to live healthy lifestyles. She received many awards and commendations for her efforts, including being named Woman of the Year in 1982 by the Niles Business and Professional Women’s Organization. In 1995, Lynn and John retired to Salem, South Carolina, settling on a lovely, small lake where they enjoyed their shared passion of fishing, though her family often teased Lynn that she preferred catching to fishing. This favored hobby was likely inspiration for her trademark exclamation, “Oh, fishhooks!” In Salem, Lynn continued giving back, volunteering in local schools and supporting her favorite philanthropic organizations. She loved keeping in touch with dear friends and planning class reunions with fellow high school classmates from Marquette’s Graveraet High. She and John spent time traveling to visit their daughters and their families and treasured the large Rigby family reunions that took place every other year for over twenty years. Lynn, or “Lynnie,” as her grandchildren affectionately called her, believed in the power of positivity, and approached each day with the mindset of “what can I do today to help others and spread happiness?” She lived her life with purpose, love, optimism, and tireless service and devotion to others. She was energized by others, and whether she was volunteering or spending time with family and friends, those who had the pleasure of her company benefited from her energy, enthusiasm, and sincere interest in their lives and wellbeing. Lynn was preceded in death by her husband John, her parents Louise (Grenfell) and Rex DeHaas, and her sisters Mary DeHaas and Jane (Jack) Stobbelaar. She is survived by her four daughters, Anne (James) Haley, Jane (James) Badger, Sara (John) Raster, and Mary (John) Scoville; her grandchildren, Jacqueline (Adam) Perez, Reeves and Alice Haley; James (Sarah), Charlie, and Emma Badger; Jack and Olivia Raster, and Emily (Zachary), Alexandra and Harris Scoville; and her great granddaughter Aimee Perez. She will also be missed by her nephews Leif (Muriel) Rigby and Michael Rigby, and Woodson (Mandy) Carlisle III. A private memorial service will be planned in coming months. To honor Jacqueline, in lieu of flowers, the family asks that you do something to help others and spread kindness. Lynn would have loved that. Donations can also be made in Lynn’s name to the South Carolina Botanical Garden. Checks may be sent to Clemson University Foundation, PO Box 1889, Clemson, SC 29633-1889, with the notation of “in memory of Lynn Rigby” on the memo line.

Jacqueline DeHaas Rigby, beloved wife, mother, grandmother, and friend, passed away from pneumonia caused by the Coronavirus on October 15, 2020 at the age of 88. Jacqueline was born on June 26, 1932 in Waukegan Illinois and raised in Marquette,... View Obituary & Service Information

The family of Jacqueline DeHaas Rigby created this Life Tributes page to make it easy to share your memories.

Send flowers to the Rigby family.