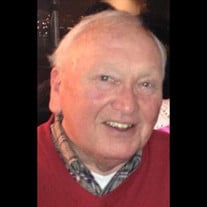 On Friday, November 27, 2020, the Malone family lost their hero. John Robert “Bob” Malone went peacefully to heaven in his sleep at home. He spent the Thanksgiving holiday surrounded by his family including his wife Carolin Kern Malone of 56 years and many of their children, grandchildren and great grandchildren. Bob was born in Newark, NJ in 1942. He left his childhood home to attend Notre Dame where he met his wife. He graduated in 1965 with a Bachelor of Science degree in Aerospace Engineering. He was a diehard Notre Dame fan for over 50 years. He started his career at Lockheed in Los Angeles, CA working on the SR-71 Black Bird. Bob then worked for General Electric as an executive in the divisions of Marine, Locomotive, Off Highway, and Aircraft Engine. He retired from GE after 34 years at the age of 57. His strong work ethic continued through volunteering for their community including being the Commissioner of the Keowee Fire Department from 2008-2012. He and Carolin made loving homes for their family in Los Angeles, CA; Boston, MA; Rockville, MD; New Port News, VA; McKean, PA; Cincinnati, OH and London England before retiring to the lake house in Seneca, SC. Together Bob and Carolin shared a love of the Arts, gardening, fishing, boating, golf and hunting as well as traveling the world. Bob leaves behind his wife Carolin, daughters Heather Malone-Grippe and Rebecca Neighborgall (Clark), sons John Keith Malone and James Malone (Tamara), granddaughters Alexandra Doucet (Russell), Melissa Malone, Kayla Malone, Jillian Malone, Elizabeth Malone-Grippe and grandson Jack Malone-Grippe as well as great grandchildren Chase, Liam, Ava and Cole. He is also survived by his brothers Thomas “Randy” Malone (Elaine) and Dale Malone (Marsha). He is preceded in death by his mother, Dorothy Shadis Malone and father John “Jack” Malone, as well as his brother David Malone and David’s wife Dorinda. He will be missed by many especially Carolin’s family; brother Brian (Dorothy) their children and grandchildren and her sister Kathy as well as countless other family, friends and neighbors. Due to the complications of Covid-19 gathering restrictions, no plans have been set for a formal celebration of his life at this time. Please consider donating in Bob’s name to local charities including the Keowee Fire Department Keoweefire.org, reference Bob Malone; Hospice of the Foothills-Cottingham House, call 864-885-7912 to donate in memory of J R "Bob: Malone; or Safe Harbor- Oconee at P.O. Box 174, Greenville, SC 29602 or online at www.safeharborsc.org/donation. All monetary donations are processed through our Administrative Offices in Greenville, but all gifts with an Oconee indication/note will be designated for our Oconee Shelter.

On Friday, November 27, 2020, the Malone family lost their hero. John Robert &#8220;Bob&#8221; Malone went peacefully to heaven in his sleep at home. He spent the Thanksgiving holiday surrounded by his family including his wife Carolin Kern... View Obituary & Service Information

The family of Mr. John Robert Malone created this Life Tributes page to make it easy to share your memories.

Send flowers to the Malone family.