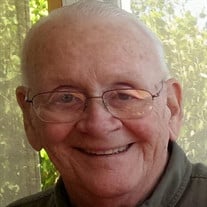 John Millard Rigby, 92, of Salem, South Carolina, beloved husband, father, and grandfather, died on Friday, September 25 at Oconee Memorial Hospital after complications from surgery. John was born on May 15, 1928 in South Bend, Indiana to Mary Poindexter Rigby and Frederick Millard Rigby. John graduated early from John Adams High School and matriculated to Westminster School in Simsbury, Connecticut, where he excelled as a multi-sport athlete. John followed his older brother to Yale University, graduating in 1951 with a degree in History, after which he returned to his birthplace to successfully complete his JD from the University of Notre Dame. In the summer of 1954, John met the love of his life, Jacqueline “Lynn” DeHaas. In a letter to his Yale buddies, he wrote, “Boys, I’ve found the one”. After a whirlwind courtship, they were married on October 30, 1954. John and Lynn settled in Niles, Michigan where John practiced law and served as the city attorney. It was there where John and Lynn raised their four daughters, Anne, Jane, Sara, and Mary. Upon retirement, John and Lynn moved to South Carolina, fulfilling a dream of living quietly on a small lake and owning a bass boat where they could enjoy their shared love of fishing. They spent over 25 years admiring their lake view and hosting family gatherings. John spent many happy hours puttering in his workshop crafting cabinets and bookshelves, and was a lifelong reader, a passion he passed on to his daughters. He was a devoted and proud 51-year member of AA where he met many of his closest and dearest friends and spent years as a mentor to others. John’s greatest joy was his family and he loved nothing more than spending time with his daughters and their families and his nephews and their families. He will be remembered for his strength of character, his wonderful dry sense of humor, and his devotion to family. John was preceded in death by his parents, his beloved step father Woodson Carlisle, Sr., and his brothers Robert Rigby and Woodson Carlisle, Jr. Sadly, less than three weeks after his death, his dear wife of nearly 66 years, Lynn, passed away from pneumonia caused by the Coronavirus. John is survived by his daughters, Anne (Jim) Haley, Jane (Jim) Badger, Sara (John) Raster, and Mary (John) Scoville; his grandchildren, Jackie (Adam) Perez, Reeves, and Alice Haley; James (Sarah), Emma, and Charles Badger; Jack and Olivia Raster; Emily, Alexandra, and Harris Scoville; his great-granddaughter, Aimee Perez; his nephews Leif Christian (Muriel) and Michael Rigby, and Woodson (Mandy) Carlisle III, and his grand nieces and nephews Quentin, Chloe, Charlotte, Erica, and Ben Rigby. Per John’s wishes, the family will scatter his ashes upon his favorite lake in Northern Canada.

The family of John Millard Rigby created this Life Tributes page to make it easy to share your memories.

Send flowers to the Rigby family.