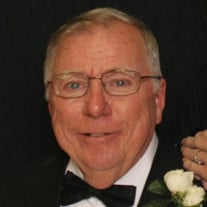 Olin Ronald (Ronnie) Tucker, 78, of Walhalla died, with his family by his side, on May 20, 2020 at Cottingham Hospice House in Seneca, South Carolina. He was born in Seneca, SC on May 26, 1941 and was the loving husband to his wife, Jennie, for 59 years. Ronnie proudly served his country in the US Navy for four years. He was stationed on board the USS Essex and USS Lexington aircraft carriers and continued to love and support his country in all ways possible. With his four late brothers, Ray, Bill, Charles, and Marvin Tucker, they collectively served their country for 82 years and he was always proud that two of his brothers received purple hearts. He was an Industrial Engineer at Chicopee for 20 years and later retired as a Chemist from Duke Energy. He was a member of Rocky Knoll Baptist Church where he served the Lord and was a member of the Fellowship Sunday School Class. Ronnie was the perfect husband, father, and friend and will be dearly missed. Ronnie was the son of the late Eloise and Samuel Tucker of Seneca, SC. He is survived by his wife, Jennie Tucker; his four children Paula Turnage of Walhalla, SC, Lynette Vickery and husband Jerry of Walhalla, SC, Mary Schulenburg and Fiancé Jamey White of Walhalla, SC, and Michelle Piekutowski and husband Jim of Pittsburgh, PA; his eleven grandchildren Alex Turnage; Trey, Tucker and Sydney Vickery; Madison, Zach, and Emma Schulenburg; and Mia, Jenna, Ty, and Lani Piekutowski; and two great grandchildren Adam and Elliott Vickery. He is also survived by many nieces and nephews, including Sarah (Lee) Yourn and husband Shawn. Funeral Services will be at Rocky Knoll Baptist Church, June 18, 2020 at 10:30 a.m. In lieu of flowers, the family requests donations be made to Oconee Hospice of the Foothills, Cottingham Hospice House, Attn: Foundation Office, 298 Memorial Drive, Seneca, SC 29672 or at https://www.ghs.org/healthcareservices/hospice-of-the-foothills/giving-back/.

Olin Ronald (Ronnie) Tucker, 78, of Walhalla died, with his family by his side, on May 20, 2020 at Cottingham Hospice House in Seneca, South Carolina. He was born in Seneca, SC on May 26, 1941 and was the loving husband to his wife, Jennie,... View Obituary & Service Information

The family of Mr. Olin Ronald (Ronnie) Tucker created this Life Tributes page to make it easy to share your memories.

Olin Ronald (Ronnie) Tucker, 78, of Walhalla died, with his family...

Send flowers to the Tucker family.