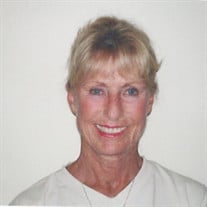 It is with deep sorrow that the family of Patricia (Corey) Boni announces her passing on Sunday, April 5. She was 80. She died suddenly of coronavirus complications while at Oconee Memorial Hospital. Known affectionately by family and friends as Pat or Patsy, she was the beloved wife of Bruce Boni of Salem, SC. Theirs is a love story that began in Massachusetts more than six decades ago when they caught each other’s eyes at East Bridgewater High School. She was a cheerleader and he was a player for the mighty Vikings. Always up for adventure, Patsy and Bruce married and traveled the world together. “We did it all, kid,” she wrote to Bruce while she was in the hospital. They rode camels, tasted goat eyeballs, and shared a myriad of adventures from India, Holland, and France to Germany, Brazil, Honduras, and Japan, where they lived for a time. Her favorite country to visit was Italy. As an executive for GE, Bruce’s job took them all over the United States. She loved family vacations and enjoyed swimming, skiing, and golfing with her sons Michael and Kenny, who filled her life with joy. They lived in Schenectady, NY, Erie, PA, Minneapolis, MN, and eventually retired to Salem, South Carolina. She made fast friends everywhere she lived, including with the Women of Wynward. She was a treasured daughter, sister, wife, mother, grandmother. In addition to her husband Bruce, she is survived by her son Kenneth Boni and his girlfriend Leslie Steele of Seneca, SC, as well as three granddaughters: Christy Marie, Madison Anna, and Grace Elizabeth. She adored her Boni girls. She is preceded in death by her parents Harry M. and Priscilla (Stearns) Corey and her son Bruce “Michael” Boni. In honor of Michael, she has devotedly worked to raise awareness and funds for people with HIV/AIDS and has been an ardent supporter for David Cottrell’s FAITH (Facing AIDS Is Through Hope) Team, which was founded by Michael’s childhood friend and raises money for groups such as Fenway Community Health in Boston, MA. Born in Connecticut, Patsy grew up in East Bridgewater, where she lived with her large family and graduated from high school. She held many jobs over the years from model to Montessori assistant teacher. She and Bruce opened a successful women’s clothing store with her brother and sister-in-law Bruce and Cheryl Corey. They named it Fashoda, and it was so popular it was followed by a second store. Cherished in life by her husband, siblings, sons, and grandchildren—as well as loving circles of extended family and friends—Patsy and her twinkling smile will be dearly missed. She enjoyed spending time with friends and family and making her famous “Nanny’s Marinara” for them. She liked gardening and making personalized craft gifts. Patsy was a master of the family “Corey Call,” joyfully using it to gather her loved ones to her. Her family expects that she is now singing out a heavenly version. Affectionately and teasingly known by her siblings as “Patsy Ratsy,” she will be warmly remembered for her vivacious and fun-loving personality. She is survived by her sister Annette Holmes of Massachusetts; sister Virginia and her husband Brian Spaulding of Maine; her brother Ronald and his wife Renee Corey of Florida; her brother Bruce and his wife Cheryl Corey of Connecticut; her brother Dean Corey of Florida; her sister-in-law Denise Corey of Florida; her brother-in-law Arthur Stinchfield of Massachusetts, and her brother- and sister-in-law Albert and Alice Lawson Boni of South Carolina. She was preceded in death by her sisters Gail Corey, Mary Corey, Frances McCormack, and Judith Stinchfield; brothers Harry “Mickey” Corey and Gordon Corey; sisters-in-law Marguerita Corey and Pam Boni; brothers-in-law James “Dennis” Boni, John J. White, Joseph McCormack, and Chester Holmes. In lieu of flowers, those who would like may donate in honor of Patricia Boni to Fenway Community Health and send contributions in care of David Cottrell, 9 Tryon Street, Scotia, NY, 12302-5816. An interment ceremony will be scheduled for a future date at Central Cemetery in East Bridgewater. The family will also hold a celebration of life at a later date and will update the obituary at BlueRidgeCremationSociety.com.

It is with deep sorrow that the family of Patricia (Corey) Boni announces her passing on Sunday, April 5. She was 80. She died suddenly of coronavirus complications while at Oconee Memorial Hospital. Known affectionately by family and friends... View Obituary & Service Information

The family of Mrs. Patricia Corey Boni created this Life Tributes page to make it easy to share your memories.

It is with deep sorrow that the family of Patricia (Corey) Boni...

Send flowers to the Boni family.