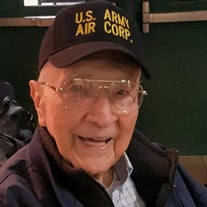 Mr. Paul John Reckert June 16, 1925 – October 15, 2020 Fair Play, SC – Paul Reckert, 95, beloved father, grandfather, uncle and friend, left us Thursday, October 15th while at home to be with his Lord and Savior and reunite with the love of his life, late wife Pauline Reckert of almost 63 years. Born June 16th, 1925 in St. Louis, Missouri to the late Paul Rudolph and Amelia Marie Reckert, Paul grew up there playing the baby grand piano his parents bought him at age 6. He was an enthusiastic piano player and played in his grandfather’s saloon (for beer!) later in life while attending St. Louis University. As a young boy, he was part of The Goodfellows group at church where he met 6 truly life-long friends even after they all grew up and went separate ways. Upon graduation from Beaumont High School in St. Louis at age 18, Paul joined the U.S. Army Air Corp in June 1943 during World War II and served for 3 years. He was a Flight Officer stationed in Texas assigned to Bomb Squadron 51, 8th Air Force, Advanced Bombadiering and Navigation training on the Norden Bombsite. He received his Bombadier Wings and commission as a 2nd Lieutenant and trained cadets from France, Brazil, and China in bombadiering and navigation on twin-engine AT-7s. Paul had a 34-year career with Republic Steel (where he met Pauline) in roles as Operations & Inventory Manager for their warehouses, as well as Credit & Claims Manager and Southwestern District Manager. He was often transferred, and he and Pauline lived in Youngstown, OH, Oklahoma City, OK, Atlanta, GA, McKenzie, TN, and Houston, TX – making many friends along the way. Their 3 children were born during this time and went along the journey across several states. Following an early retirement, he and Pauline spent a few years enjoying life and travelling before he returned to work for 4+ more years in Atlanta. Then they built their retirement home on Lake Hartwell where they lived longer than anywhere previously, and they lived happily ever after – making more memories with all their family and friends who visited often. Paul was a family man who enjoyed fishing, boating, playing the piano, singing & dancing with Pauline, playing games, and oh the joke telling! He never acted his age and his active involvement over 25 years of retirement kept him young! He served on the subdivision’s HOA for years, attended many local community planning commission meetings, and was involved in the Men’s Group, Rotary Club, and Knights of Columbus at church. He was deeply concerned about local, state, and federal government affairs and wrote several “opinion” columns published in the Seneca Journal. Paul was a smart, kind, caring, generous, and fun-loving person who brought so much happiness to others. He will be greatly missed. Paul is survived by his daughter Mary Lee Ackley (David), son Paul Reckert, Jr. and daughter-in-law Selena, daughter Nancy Nevins and son-in-law Joel, grandson Nicholas Ackley and wife Natalie, granddaughters Julia and Carly Nevins, Amy Dupas and husband Pascal, and three great grandchildren Julien, Liam and Amelie Dupas. Paul has one nephew Ken Sledge, Jr. (wife Bev) and three nieces Kathy Prasad, Jean Sabol (husband Mike), Patty Brown (husband Charles) and extended family members and friends. Paul was preceded in death by his wife Pauline, his sister Dolly and brother-in-law Ken Sledge, his parents Paul & Amelia, and all his sister-in-laws and brother-in-laws by marriage. The Reckert family invites you to his Funeral Mass on Saturday, November 7th at 11:00 a.m. at St. Paul the Apostle Catholic Church, 170 Bountyland Road, Seneca, SC. Following, any are welcome to drop by Paul’s house to help celebrate his life with stories and memories. In lieu of flowers, the family requests donations be made in honor of Paul to St. Paul the Apostle Catholic Church, to St. Jude’s Children’s Research Hospital, or another charity of choice.

The family of Mr. Paul John Reckert created this Life Tributes page to make it easy to share your memories.

Send flowers to the Reckert family.