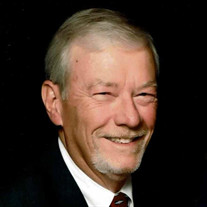 On Wednesday, September 8, Russell Max Landis, 74, of Salem, S.C., passed away unexpectedly at home. Due to the ongoing COVID-19 pandemic, a memorial service will be scheduled later in the year. Russ was born in Pittsburgh, PA on July 20, 1947 to the late Charles and Edna Landis and spent most of his life in the Pittsburgh area. After high school, Russ graduated from West Virginia University with a degree in Engineering and started his career at Westinghouse shortly thereafter. He also earned an MBA from the University of Pittsburgh while working and eventually opened his own firm: IMS Consulting. During this time, Russ embarked on the most important parts of his life: starting a family and marrying his beloved wife of 24 years, Lynn. Eleven years ago, Russ retired to the wonderful community of Keowee Key where he spent his days with family and friends on the tennis court, the golf course, and the lake. He was passionate about helping his community, serving on the KKUS Board and as President of Firewise. In addition to his parents, Russ was preceded in death by his brother, Kevin, and his first wife, Michelle. Russ was a devoted husband, father, and grandfather who brightened the lives of everyone he met. His dedication to his family, his community, and his faith was an inspiration to his family and many friends. Russ is survived by his wife, Lynn; his daughter, Julie Capane (Donald); his stepchildren, Christopher Heilman (Sarah), Elizabeth Greenwald (Jeffrey), and Gregory Heilman; his grandchildren, Emily Landis-Dunham, Aiden and Madison Greenwald, Evelyn, Asher, Joshua, and Matthew Heilman, and Joseph and Salvatore (Caitlyn) Capane; his sister-in-law, Mary; his parents-in-law, Howard and Doris Bower; and too many other beloved family and friends to name. In lieu of flowers, the family requests that memorial gifts be made to the American Heart Association by visiting heart.org.

On Wednesday, September 8, Russell Max Landis, 74, of Salem, S.C., passed away unexpectedly at home. Due to the ongoing COVID-19 pandemic, a memorial service will be scheduled later in the year. Russ was born in Pittsburgh, PA on July 20, 1947... View Obituary & Service Information

The family of Mr. Russell Max Landis created this Life Tributes page to make it easy to share your memories.

Send flowers to the Landis family.