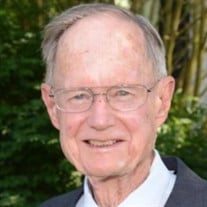 William Robert Frazier, 93, passed away October 13, 2020 after a long struggle following a fall and traumatic brain injury. Bill was born in 1926 in Washington, D. C., the only child of the late William Carroll and Sada Brown Frazier. He was educated in the Madison, Wisconsin public schools. As a proud veteran, he served in World War II from 1945 – 1947 with the 2nd Cavalry Regiment in Germany. After the war, he earned both Bachelor’s and Master’s degrees in Bacteriology from the University of Wisconsin, Madison. He married the love of his life, the late Anne McElvain Frazier in 1951 in Madison, Wisconsin. They remained loving and strong partners for 53 years until Anne’s passing in 2004. After graduating from the University of Wisconsin, he and Anne moved to New Jersey to begin his career and to start a family. Bill was involved in his three children’s lives, actively supporting and encouraging their interests, activities, and pursuits. He was an avid gardener, sports enthusiast, and history buff. He spent his scientific career at E. R. Squibb & Sons, New Brunswick, NJ in various capacities in The Squibb Institute for Medical Research, Manufacturing and Chemical Division. He held the position of Research Fellow, involved with fermentation technology, process development, start-ups, was the manufacturing liaison, and conducted research in the fields of microbial fermentation associated with antibiotics, microbial transformations, and enzymes. He had several extended overseas assignments in India, Brazil, and Italy, making lifelong friends wherever he traveled. On retirement in 1986, he and Anne moved from Princeton, NJ to Keowee Key, Salem, SC where he resided since. During retirement, he and Anne enjoyed world travels as well as activities in the community. He appreciated any chance to get out and connect with people around him. He volunteered in the Emergency department at Oconee Medical Center for over 20 years, was a member of the Nine Hole golf group, Key Bowlers groups, Seneca Coffee Club, the Salem Lion’s Club, and the Keowee History Club. Bill was best known for his subtle and quiet wit, his generosity, encouraging and uplifting words to his family and those around him, and his openness to new friendships with anyone he met. He often took the time and effort to inspire and encourage others. He left behind a legacy of support and kindness which will carry beyond his life here on earth. He will be deeply missed by those who knew him. In addition to his parents and wife, Bill was predeceased by his step-mother Hildegarde Shultz Frazier, and his sister-in-law and brother-in-law Jane McElvain and Carl Edwin Jenkins. He is survived by three children, William S. Frazier, of Helena, Montana, Jane Reed (Thomas) of Seneca, SC, and Barbara Ambos (Douglas), of Sherborn, Massachusetts, six grandchildren, Sarah Bekibele (Onome), William Georgitis, Mary Winters (Mark), and Samuel Georgitis, Adrienne Frazier (Dylan Smith), Scott Ambos, and four step-grandchildren, Toby Deter, Sunni Hitchcock (Clint), Jeremy Deter, and Thomas Reed. He is also survived by three great-granddaughters, Alexandria Georgitis, Sheralyn Bekibele, and Prudence Winters. A memorial service is planned for November 22 at 3:00 at King’s Grove Baptist Church in Central, with a reception to follow. In lieu of flowers, contributions in Bill Frazier’s honor may be made to Hospice of the Foothills or a charity of your choice. The family would treasure your memories of Bill. These may be expressed online by visiting blueridgecremationsociety.com.

William Robert Frazier, 93, passed away October 13, 2020 after a long struggle following a fall and traumatic brain injury. Bill was born in 1926 in Washington, D. C., the only child of the late William Carroll and Sada Brown Frazier. He was... View Obituary & Service Information

The family of Mr. William Robert Frazier created this Life Tributes page to make it easy to share your memories.

Send flowers to the Frazier family.